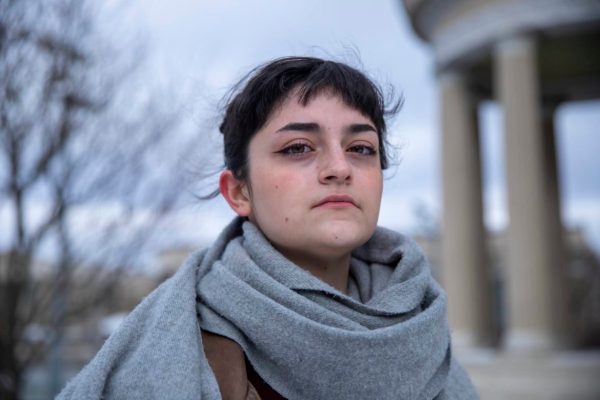 By Naomi Harris of PublicSource

International students in Pittsburgh look to the incoming Biden administration for change but are still left with a deep sense of instability after four years of restrictive immigration policies, anti-immigrant rhetoric and now a global pandemic.

Some international students and students with dual-citizenship pursuing education in Pittsburgh, have been feeling unwelcome, others have expressed uncertainty and spoke of the challenges of pursuing higher education in the U.S. while Trump administration policies changed visa statuses and banned people from majority Muslim countries.

Now students are navigating an unprecedented semester due to the spread of the coronavirus.

Some faced tough questions of what it means to belong and what it would take to pursue  education in another country. Others took the brunt end of harmful rhetoric spread by political figures and others emboldened to promote racist behavior.

Recent data surveying over 700 higher education institutions reported a decline in international enrollment this semester due to the pandemic, and some institutions also point to the limiting environment created by the Trump administration. If the trend continues, it could negatively impact the Pittsburgh economy.

With a new administration in the White House, international students could face a new era, though many are weighing whether the turmoil of the last four years means there is a better future outside of the U.S.

Studying during the Trump era

Niles Xunan Guo initially moved to the U.S. in 2011 to work in the tech industry in Seattle. In 2015, Guo saw a collective global effort to address climate change with the start of the Paris climate accords, and believed the U.S. and other countries were making progressive strides, he said.

So in the fall of 2016, he ended up at Carnegie Mellon University for the opportunity to develop the necessary graduate skills to pivot away from tech to climate. Not long after, Trump was elected president.

But Guo said he did not believe the anti-immigrant rhetoric used in the Trump campaign would translate into policy.

Gaurav, who asked to not include his last name or school due to concerns about immigration enforcement, had a personal connection to the college. He said his uncle had gone to the same school in the 1990s to get his Ph.D.

Even so, Gaurav kept his expectations about treatment by others as an international student low before the 2016 elections.

“Something I’ve noticed in my experience with many international students is our expectations of what is kind of owed to us is very low,” Gaurav said. “I definitely didn’t have many expectations and I feel like that made me not notice a lot of things in my first couple of years that I was here.”

He brushed off the microaggressions like people commenting on how well he spoke English, he said.

When Trump won the election, Guo said it was a shock to his system. Studying in Pittsburgh, especially with a big international student presence, Guo said he felt insulated and supported.

And then around the time of the elections, he experienced firsthand a change in sentiment towards international students. Guo remembered jogging back from Carnegie Mellon campus to his apartment when someone threw an empty soda container at him. At first, he was confused about what was happening until he realized it was not an accident. Then he became sad and frustrated.

Within the first month of Trump’s presidency a travel ban was announced, mostly targeting Muslim-majority countries. Immigrants and international students took it as a declaration that not everyone would be welcome into the U.S.

Darya Kharabi, an undergraduate student born in the U.S. with family from Iran, remembered during their first year at Carnegie Mellon the anger and pain they felt after hearing about the first travel ban.

Kharabi knew how hard it is to gain citizenship as they saw their parents, brother and family friends all go through the process.

“The Trump administration has been very much anti-immigrant, anti-Brown people — especially anti-Iranian, and it really sucks. It really sucks to see definitive steps being taken to like ban people coming from these Muslim-majority countries,” they said.

The first iteration of the ban was enough to show some international students the true intentions of this administration. Guo realized it would be a very different era from what he was used to.

“My faith in the steady progress of this country was kind of shattered that first year,” he said.

Anxiety and stress also became a symptom of studying in the country for some international students.

Guo, who was born in China but moved to Canada at 9 years old, said crossing the border started to become a stressful event.

“There’s no reason, but every time, right before I drive up to the border agent to get into the U.S., I get anxious because it’s like — I wonder what is going to happen now,” he said.

“There is no longer a guarantee that these things will be respected and that these processes will be followed.”

“My faith in the steady progress of this country was kind of shattered that first year.”

Some of the stress stemmed from direct changes in policies for visas or bans of countries, but the general immigration process for immigrants and international students began to change, for instance with delays in paperwork.

In response, 60 universities filed an amicus brief in support of a lawsuit by Harvard and MIT to stop the order, including the University of Pittsburgh and Carnegie Mellon. CMU’s president  spoke out against the order, emphasizing the role of international students.

“Forcing any international student who is in the United States legally to transfer or leave the country at this unprecedented time is profoundly misguided and painfully cruel,” CMU President Farnam Jahanian said in a letter dated in July.

“Furthermore, these and other rash, anti-immigration actions threaten to erode the very foundation of the American university system and its powerful and positive impact on economic prosperity and our national security.”

New international enrollment numbers have declined this past semester.

The numbers were not shocking for international education organizations. NAFSA’s Executive Director Esther Brimmer attributed the decline to the impact of COVID-19 but also pointed to the Trump administration.

“For the past four years international students and scholars have had to endure travel bans, executive orders, detrimental regulatory actions and xenophobic rhetoric from the highest levels of U.S. government. The lack of a coordinated national pandemic response made the situation even more difficult,” Brimmer said in a statement.

Pennsylvania has the sixth-largest population of international students in the U.S. Enrollment here declined by 3.4% from 2018-2019 school year to 2019-2020 school year, according to Open Door.

The University of Pittsburgh attributed the decrease from 3,186 international students last fall to 2,715 this fall to the challenges of international travel due to the pandemic, according to the university spokesman.

University of Pittsburgh Vice Provost for Global Affairs Ariel Armony said international students who go back to their home countries oftentimes become leaders in their fields and rely on the connections they made while studying abroad.

“For the past four years international students and scholars have had to endure travel bans, executive orders, detrimental regulatory actions and xenophobic rhetoric from the highest levels of U.S. government. The lack of a coordinated national pandemic response made the situation even more difficult.”

“The experience here is tremendously important not only for their own education but also for the general advancement of the common good,” he said.

The University of Pittsburgh outlined the crucial research done by the international community in the brief filed in support of the lawsuit. The brief highlighted that international students were working to address the pandemic at the same time federal agencies were reversing decisions that could pose a visa threat.

“In addition to vaccine research, international students and faculty play integral roles on various research teams in both the Schools of Medicine and Pharmacy as well as the Graduate School of Public Health,” the brief stated.

“These teams are currently working on multiple research projects that directly and indirectly address the challenges posed by the pandemic, such as data analysis of the growing cohort of COVID-19 patients in the University of Pittsburgh Medical Center’s Intensive Care Unit.”

But before international students contribute to research or global connections, many make an important decision to study in the U.S., Armony said.

Studying in another country means a student leaves an established support network of family and friends and must adjust to a new country, sometimes a new language, Armony said. When students make that financial decision, the hope is that the “rules of the game” are also respected, he said.

“It is very, very important to have a system that is stable, where the rules under which I enter my particular experience are going to be kept in place,” he said.

But international students felt anxious about the elections and what could happen next.

“With our international students, both undergraduate and graduate students, in many ways we have heard very clearly a lot of concern, anxiety because they truly want to come here to study, complete their studies and develop their careers,” Armony said.

A week before the 2020 elections, Guo and his partner discussed if it would be best to move if Trump was re-elected. It was a weighted decision because his partner was born and raised in Pittsburgh.

“My partner was really sad because this is her country, she was born in Pittsburgh…this is her home and then asking her to move is really difficult. If Trump won we would have been almost forced to emigrate which is never something you want,” he said.

Applying elsewhere also became a recurring thought for Gaurav. What began as a joke turned more serious after the summer of confusing changes to visa policies for international students.

When President-elect Joe Biden won the election, it was reassuring but the sentiment of the past four years is still present. And, 74 million people still voted for Trump.

“The election was nowhere near as decisive as what some people predicted, which meant that the messages that (the Trump) campaign espoused resonated. People love it. They like to hear the things he wants to do,” Guo said.

On top of a stressful election, Guo also deals with racist behavior from others that was amplified due to the racialized language surrounding COVID, including Trump’s ‘Chinese virus’ slur that places blame on Chinese people and Asian Americans.

“Prior to 2016 it is not like people didn’t have these thoughts and it’s not like people weren’t necessarily talking like this behind closed doors. But what this administration, and the campaign before it, did really well was to allow people to have these conversations in polite society,” Guo said.

But he is also learning to more strongly identify with his Chinese ethnicity, and how it has shaped him as a person.

Now with the spring semester approaching and a new president set to enter office at the end of January, there is some hope for change among international students but the ramifications of what was exposed still lingers.

Gaurav said there is no longer an imminent threat. But what has been revealed is how fragile his status can be in the U.S.

Naomi Harris covers higher education at PublicSource, in partnership with Open Campus. She can be reached at naomi@publicsource.org.

This story was fact-checked by Emily Briselli.