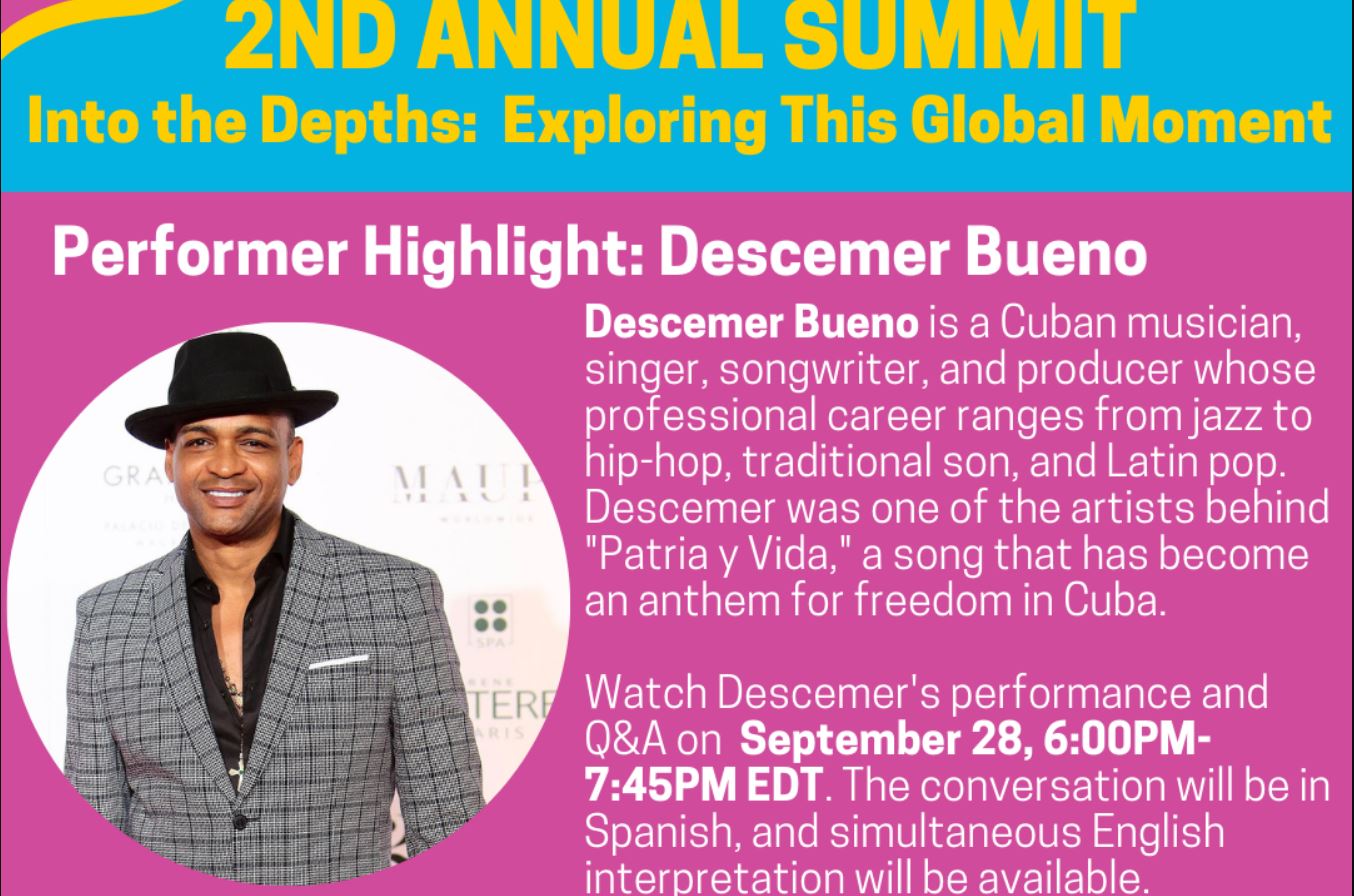 On Tuesday, September 28 at 6 p.m. Pittsburgh World Affairs Council Executive Director Betty Cruz will chat with Cuban artist Descemer Bueno about the demonstrations in Cuba this summer and his perspective on the role of artists in humanitarian movements. After the talk, Descemer will play songs written specifically to bring awareness to social issues. The conversation will be in Spanish with simultaneous English interpretation.

Descemer Bueno is a Cuban musician, singer, songwriter, and producer whose professional career ranges from jazz to hip-hop, traditional son, and Latin pop. Born in Havana in 1971, Bueno’s first professional job was as the bassist for Santiago Feliú. In 1990, he started his own jazz band, Estado de Animo, with guitarist Elmer Ferrer and pianist Roberto Carcassés. They garnered national attention and toured Europe and South America.

Bueno later reunited with Carcassés in Dafnis Prieto’s jazz band, Columna B. The band signed to Mas y Mas, recorded their debut album, and toured America before moving to New York. The exposure to rap in the Bronx inspired Bueno to co-found the hip-hop group Yerba Buena. They cut four albums between 2003 and 2007 and incorporated a wide variety of Caribbean rhythms. Bueno eventually returned to Cuba where he signed with Universal Music Latino and released his first album, Siete Rayo, in 2005. The album combined Afro-Cuban rhythms, reggaeton, calypso, reggae, cumbia, and rap.

Bueno’s tunes were also being recorded by an astonishing number of artists including Andres Levin, Ana Torroja to Thalía, Baby Lores, Reyli Barba, and Fonseca. He received ASCAP awards in 2009 and 2010 for “Lloro por Ti,” recorded by Enrique Iglesias. In 2011 he won the Grammy Award for Latin Song of the Year for penning the hit duet “Cuando Me Enamoro,” which the singer recorded with Juan Luis Guerra. In 2012, he won another ASCAP award for composing Wisin y Yandel’s “No Me Digas Que No.”

In 2013, Bueno recorded “Dragonfly” with legendary Cuban vocalist Omara Portuondo, and produced tracks by Omi Hernández and Luna Manzanares. He collaborated with Iglesias again in 2014, sharing the billing on the hit single “Bailando” with Luan Santana and Gente De Zona.

In February 2021, Bueno released ‘Patria y Vida’ in collaboration with Alexander Delgado, Randy Malcom of the duo Gente de Zona, and Yotuel Romero, founding member of the pioneering cuban hip-hop band Orishas. The song celebrates the voice of Cuban community of artists who have rallied together in opposition to the government.