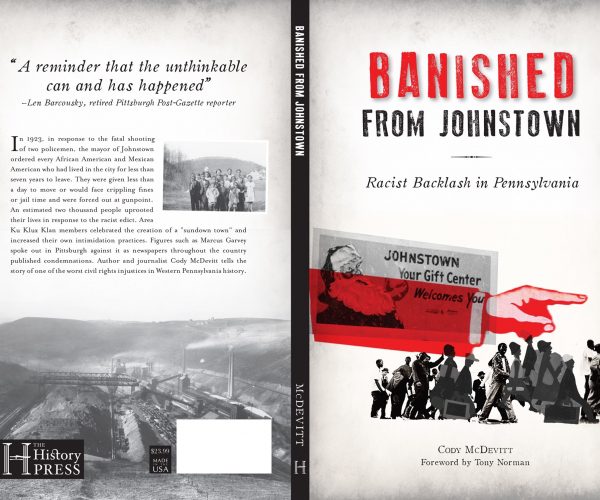 Some tragedies, like George Floyd’s death, travel the globe and force people to take a stance and create change in society. Other tragedies like Tulsa, live quietly in the dark memories of those who experience them until someone finds a way to bring them back.

Cody McDevitt, former Somerset Daily American journalist, is author the book “Banished from Johnstown: Racist Backlash in Pennsylvania.” The book released in January shares details of one of the worst racial incidents in our state’s history nearly 100 years ago. In 1923, more than 2,000 African-Americans and Mexican immigrants were ordered out of Johnstown, Pa., at gunpoint and threat of imprisonment.

McDevitt shared that “virtually every white expatriate from Johnstown or resident who still lived there hadn’t ever heard of this. Even many Black people had lost the oral tradition.

As happened in Tulsa with its race massacre, we’re in the early stages of recovering this important but neglected part of history. I thought I had to do my part with my skills as a researcher and writer to bring the story to as wide an audience as I could. And that goal endures.”

Cody McDevitt used newspaper databases, tracked down official documents and telegrams at the Library of Congress, and even translated a Mexican newspaper that had the Johnstown events featured on its front page to get a clear picture of what happened.

He also worked with various Black church and civic leaders in the area to reconstruct what life was like in that community at the time. It took him around 5 years to get the data and write the book.

Most of the black and brown population worked in the Rosedale Coke Plant or Bethlehem Steel. Mexican workers had been brought in by steel mill owners from El Paso, Texas. They worked blue-collar jobs, often the least safe and most demanding positions that white people didn’t want.

Prior to 1923, the local newspapers had criminalized their communities since they started arriving seven years earlier. When crime was reported on Mexican and Black neighborhoods, race was almost always given as a reason for why it occurred.

After an incident where a black man was accused of killing four police officers in 1923, mayor Joseph Cauffiel who was running for reelection, decided to play to the Ku Klux Klan vote in Johnstown. He ordered all Black and Mexican people who had lived in the city for less than seven years to leave at once.

After that, Cody believes most went west to Pittsburgh, and from there the migratory pattern is hard to trace.

Some have criticized Cody’s work, but many have congratulated him for taking interest in a topic which had been almost forgotten for nearly a century.

“My hope is that the book raises enough awareness about the event that people who hear about it and know something will contact me and tell me more about their ancestor’s experiences,” shared McDevitt.

Banished from Johnstown: Racist Backlash in Pennsylvania is available for purchase at this link. A portion of the royalties will go to the NAACP Legal Defense and Educational Fund.

The book has a national following on its Facebook page, The Rosedale Oral History Project.