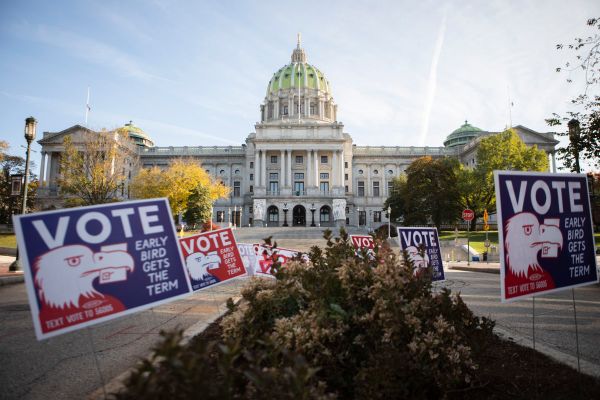 This article is made possible through Votebeat, a nonpartisan reporting project covering local election integrity and voting access. This article is available for reprint under the terms of Votebeat’s republishing policy.

HARRISBURG — As President Donald Trump continues to question the integrity of Pennsylvania’s election while repeating unverified claims of voter fraud, state Republicans are once again seeking greater powers to investigate the voting process.

Roughly two dozen House and Senate lawmakers on Tuesday called for the creation of an investigatory committee with subpoena power to conduct an immediate audit, saying they had fielded widespread doubts about the fairness of the Nov. 3 presidential election.

House Republicans championed a similar proposal before the election, but abandoned it after Democrats raised concerns it would be weaponized to impound ballots, interrogate election officials, and delay the certification of Pennsylvania’s election results.

At the state Capitol, Rep. Dawn Keefer (R., York) said the assembled lawmakers’ offices had been “overwhelmed with calls and emails and other messages from constituents who are confused and outraged by the circumstances surrounding this election.”

When asked if she had evidence that fraud had been committed, Keefer said the lawmakers had “just gotten a lot of allegations, so I don’t know.”

But Pennsylvania already has safeguards in place to ensure the accuracy of election results, experts told Spotlight PA and Votebeat. In addition to routine reviews in each county required by law, the state has started to pilot “risk-limiting” audits, a process that verifies whether a sample of paper ballots matches results captured electronically by voting machines.

Secretary of the Commonwealth Kathy Boockvar said she expects to do such a pilot audit of the November 2020 election.

Suzanne Almeida, interim director of the good-government organization Common Cause Pennsylvania, said these audits “ensure that every vote is counted accurately in the final, certified election results.”

“Efforts to throw the election results into doubt is a great disservice both to voters who turned out and to our county and state elections officials, who have the often thankless job of managing the numerous logistics, to ensure that our elections run smoothly and every eligible voter is able to cast a ballot,” Almeida said.

The calls for investigations come as Republicans, including those in leadership, continue to question a state Supreme Court ruling that allowed counties to accept ballots postmarked by Election Day but that arrived up until 5 p.m. Friday. The GOP has also targeted Department of State guidance allowing counties to contact party and candidate representatives if they rejected certain mail ballots, either because the ballot was missing a signature or was not in a secrecy envelope (known as a “naked” ballot).

Senate Majority Leader Jake Corman (R., Centre) last week claimed the Wolf administration attempted to “tip the scales in favor of Joe Biden,” while also acknowledging he didn’t “have any evidence of misdoing.”

GOP leadership said Tuesday afternoon they had tasked the House State Government Committee to investigate the election. Interim chair, Rep. Seth Grove (R., York), said in a statement a review must take place “now, while all the evidence remains before us and the events leading up to our General Election are fresh in the minds of all participants.”

Speaking to reporters Tuesday, Cutler did not say he was concerned about voter fraud. Still, he blamed “the very fact that individuals can question the results” on the state’s “conflicting” guidance and the high court’s decisions.

But the very same election and ballots Republicans are questioning as part of the presidential race handed the party a decisive victory in other contests across Pennsylvania. The GOP is expected to expand its majorities in the state House and Senate, and win the state auditor general and treasurer’s races. Republicans have so far raised no concern about races they won.

Cutler said he was “not concerned with, necessarily, who won or who lost. What I’m concerned with is that people no longer have faith in the process.”

State law already requires county boards of election to perform a statistical recount of 2% of ballots cast or 2,000 votes — whichever is less — before results are certified in each election to ensure voting machines were working properly and results are accurate.

Last year, the Department of State began piloting risk-limiting audits as part of a settlement with 2016 Green Party presidential candidate Jill Stein, who sued after seeking a recount. All counties will be required to do these audits by November 2022.

The risk-limiting audits check the state’s new voting machines with paper trails, which each county was required to obtain by the end of last year as part of the settlement with Stein. The machines allow election returns captured electronically to be confirmed against the text on paper records.

The first such audits were done in Mercer County and Philadelphia in November 2019. And in August, Boockvar announced her department had completed a statewide risk-limiting audit of the June primary election.

During that audit, counties used a statistical sample of 400 randomly selected ballots and compared the votes on paper to the totals reported by vote-counting machines. The chance that the audit gave a false-positive result was less than 0.1%.

The work group recommended repealing the requirement for a statistical recount of random ballots and codifying the use of risk-limiting audits mandated in the Stein settlement. The members also recommended that, when an audit cannot confirm the outcome of a race, state law require a recount to be done by hand.

Hope Verelst, Sullivan County’s elections director and a member of the work group, said as of the group’s last meeting, a final report was being drafted for the legislature, but the group hadn’t met in a while.

“We’ve had to drop everything” because of the demands of this election cycle, she said.

A spokesperson for House Republicans said the audit being requested by Cutler would review legislative changes made to the election code in 2019 — including the creation of no-excuse mail voting — and examine the impact of the state Supreme Court decisions.

Lyndsay Kensinger, a spokesperson for Wolf, said “allegations of fraud and illegal activity have been repeatedly debunked and dismissed by the courts.” She did not comment on Cutler’s request.

Election officials who spoke to Spotlight PA and Votebeat said they weren’t aware of the GOP’s demands for an audit, or didn’t want to comment.

“All I care is if it’s fair,” said Lisa Dart, Carbon County’s elections director, on post-election audits generally. “No matter what happens, I just want it to be fair.”

100% ESSENTIAL: Spotlight PA relies on funding from foundationsand readers like you who are committed to accountability journalism that gets results. Give now and your contribution will be TRIPLED: spotlightpa.org/donate