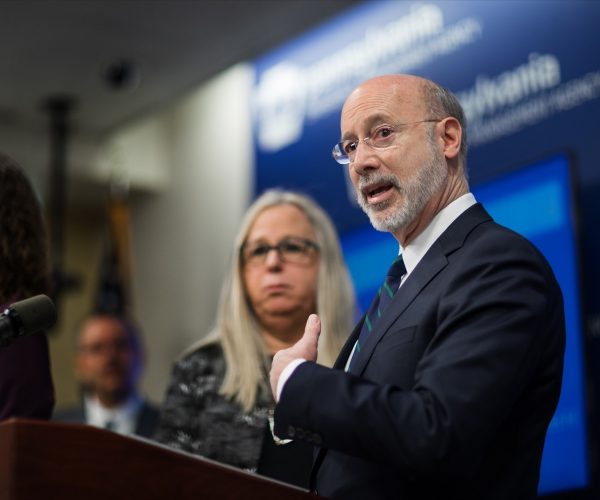 By Angela Couloumbis of Spotlight PA

Gov. Tom Wolf on Wednesday announced a tiered, color-coded system for relaxing restrictions on businesses and residents now under lockdown because of the coronavirus, providing the first glimpse of what life might look like when his administration begins reopening parts of Pennsylvania early next month.

During an early evening briefing, the governor said areas with a downward trajectory of cases over a two-week period and an adequate number of available hospital beds can enter the “yellow phase” and begin a limited reopening on May 8.

He said areas in the north-central and northwestern part of the state would likely hit that benchmark first.

Businesses there would be allowed to call employees back to work, as long as they provide masks and require workers to practice social distancing to minimize the spread of the virus. Gyms, theaters, and schools would remain closed, and large gatherings would still be prohibited. Restaurants and bars would still only be permitted to remain open for takeout food.

If there is no spike in cases, a region could then enter the green phase, which would eliminate many of the restrictions under the current stay-at-home order for residents. But, Wolf said, people should expect to follow guidance from federal and state health officials for preventing the spread of the virus, including wearing a mask during public outings.

The governor also warned that there might be stops and starts — and that if counties report spikes in cases, they could be shut down again, reentering the red phase.

“I am attempting to provide as much certainty as I can, even though the virus ultimately controls the calendar for each and every one of us,” Wolf said.

Earlier this week, the governor announced he was extending the statewide stay-at-home order until at least May 8, but signaled that he would begin relaxing restrictions after that in areas where coronavirus cases remained low.

The governor also said he will allow construction statewide to resume on May 1, as long as precautions, including social distancing, are taken on site. Wolf has also increased the number of state-run wine and spirits stores that can offer curbside pickup, and allowed car sales to resume online.

Still, Wolf’s new tiered plan for reopening will require a much greater capacity for testing and monitoring than what the state currently has in place. The administration on Wednesday did not provide specifics on how rigorous those standards will be, other than to note that it envisions community and mass testing sites, and testing through county health departments, private health systems, commercial pharmacies, and other providers.

Monitoring and tracking cases will involve a vast network of health professionals, including epidemiologists, community health nurses, and county and municipal health departments. But it is not clear how close the state is to reaching the staffing levels it needs to successfully trace the spread of the virus in communities.

Still, the administration said it had partnered with Carnegie Mellon University and other higher education institutions to develop a data dashboard that will act as an arbiter of sorts for when certain counties or regions are ready to move from one phase of reopening to the next.

That data, Wolf’s administration said, will help state officials prioritize reopening business sectors with the most potential for bolstering the state’s battered economy, while also minimizing the public health risk for workers.

“The model will help to predict and understand what types of individuals, businesses, and industries will be more at risk, most vulnerable, and impacted by COVID-19,” the administration said in a news release. “The model will apply what-if scenarios that will allow the state to understand the impact of potential re-opening decisions.”

In March, Wolf began issuing stay-at-home orders for residents in the hardest hit counties, directing them to only leave the house for necessities such as groceries and medicine. He expanded that order statewide April 1. The governor also ordered all but “life-sustaining” businesses to shut down operations in March.

As of Wednesday, health officials said Pennsylvania had 35,684 confirmed cases of COVID-19 and more than 1,600 deaths.

Spotlight PA receives funding from nonprofit institutions and readers like you who are committed to investigative journalism that gets results. Give a gift today at spotlightpa.org/donate.