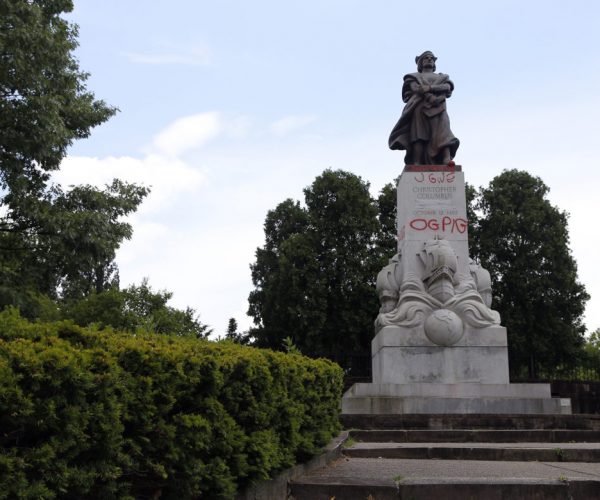 “Let us celebrate those who built this city rather than the conquerors who had nothing to do with our city and massacred innocent people,” Commissioner Andrew Moss said. “Removal should not be seen as erasure of history; removal of a monument reflects a change in our society and of our public identity as a community.”

As of Tuesday afternoon, the commission had received more than 5,000 comments from the public about the statue. Of those:

At a previous meeting on the statue in August, there was disagreement about if the Art Commission’s decision on the statue’s fate would be final or if it should be seen as a recommendation for the Mayor’s Office to consider.

Further questioning the five-member commission’s authority before the meeting’s vote, the Department of City Planning director reiterated that the commission serves as an advisory board to the mayor. The commissioners, however, held firm on its belief that it has the authority to make decisions with regard to public art.

City Planning Director Andrew Dash appeared to read from a city Law Department letter issued earlier in the day, saying that the Art Commission should only make recommendations and leave ratification of any potential decisions to the mayor at a future meeting. “As previously discussed, the Law Department has concluded that the Art Commission serves as an advisory board and cannot spontaneously ratify the removal of public art in the city without a decision from the mayor…” he said.

“It’s important,” Dash continued, “that government bodies follow procedure in taking official actions as to avoid the risk of procedural challenges that could result in those actions being voided by the court.”

In response, Commission Vice Chair Kilolo Luckett said: “In our city ordinance, it is under the Art Commission’s purview and that we do have the authority to make a decision.”

While debates over the commission’s power may continue, the commissioners argued that it’s best the statue be moved to a museum with education about what led to the statue’s construction and be replaced with a figure that represents the “City for All” Pittsburgh markets itself to be.

The consensus among commissioners was that although they empathized with the discrimination the Italian-American community has endured in the past, allowing a figure such as Columbus to remain on a pedestal came at the expense of the communities harmed by his behaviors.

“Glorifying our history by subjugating another doesn’t elevate us,” Commissioner Sarika Goulatia said. “Italian-Americans have a rich culture and a rich heritage. Their warmth and inclusivity gives them the power to be celebrated alongside Indigenous Pittsburghers. This is a pivotal moment where we can show our connection as human beings, where our glory cannot ride on another’s pain or a single perspective.”

Despite historians’ take on Columbus’s actions, many Italian-Americans inside and outside of the community still view him as a hero and have resolved to challenge any decision to remove his statue.

Basil Russo, president of the Italian Sons and Daughters of America [ISDA], testified that his organization has retained legal counsel to keep the statue in place no matter what the city decided.

“The ISDA feels very strongly about this issue. We feel that this effort to remove this statue from Schenley Park is an effort to erase the history of Italian Americans in the city of Pittsburgh and contributions Italian Americans have made to this city,” Russo said. “We are prepared to do whatever is necessary legally to protect our community’s interests and to ensure that our community’s interests are not overridden by any other community.”

Atiya Irvin-Mitchell is a Pittsburgh-based freelance writer. She can be reached at airvinmitchell@gmail.com and you can follow her on Twitter @AtiyaWrites.