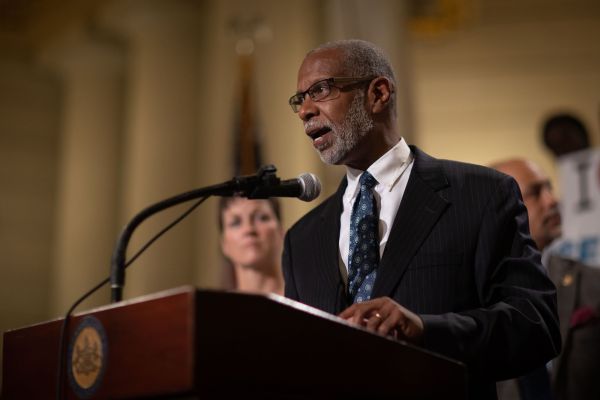 By Jamie Martines of Spotlight PA

HARRISBURG — A state senator Wednesday called on officials of Pennsylvania’s system of public universities to prioritize solutions to address racism and inequity experienced by students of color as part of a larger planned restructuring.

Citing an August report by Spotlight PA that documented the mental and academic impact of ongoing racism at schools in the system, known as PASSHE, state Sen. Art Haywood criticized administrators and state leadership for failing to take meaningful action.

“My concern is that any redesign be done in a way that African American students can feel comfortable attending these institutions, not attend and then have to fear for their lives and escape, going home with one year or two years of debt,” Haywood (D., Philadelphia) said.

The Spotlight PA report found that although the system has made strides in attracting more students of color, many said they were not supported once on campus. At best, many students of color said they felt unwelcome and ill-supported; at worst, unsafe and targeted.

Haywood’s comments came during a hearing by the Senate Appropriations and Education committees on efforts to restructure the higher education system, including potentially integrating or merging six of the 14 state universities. The system has faced about a decade of declining enrollment.

PASSHE representatives who were at the meeting, including Chancellor Daniel Greenstein, did not respond to Haywood’s remarks. Contacted after the hearing, Greenstein said through a spokesperson that officials, faculty, and staff “do not and will not accept this status quo.”

“Do we have to work to do? Yes we do. And we are on it,” he said. “I am proud of the accomplishments that we have made and of the commitment that we collectively bring to addressing egregious injustices, which have persisted too long in our country. On this issue we shall not rest.

In a tweet, PASSHE noted that the system’s board of governors this month established a commission to handle diversity, equity, and inclusion. As part of Spotlight PA’s report, “Condemn, Discuss, Repeat,” many students said the state system followed a tired formula to respond to racism rather than enacting meaningful change.

Students also said they had minimal access to Black counselors, professors, and mental health support — further evidence that while students are heavily recruited to attend these universities, they’re not supported once they’re there, Haywood said.

The state system in August hired Dr. Denise Pearson to serve as vice-chancellor and chief diversity, equity, and inclusion officer to oversee faculty and employee recruitment and to implement policies related to diversity and equity.

While he is pleased that Pearson was hired, Haywood said simply hiring someone isn’t enough.

“I received it as what I’ve seen as a typical play, where there’s a diversity problem and an African American is put at the head of dealing with what is essentially a white, race discrimination problem,” Haywood said.

Haywood is the second state senator to raise the Spotlight PA report in their criticism of the state system’s redesign process.

Sen. Judy Schwank (D., Berks) also referenced the report when she asked the PASSHE board of governors in August to include racial equity in redesign plans.

“This is exactly the time to have this discussion,” Schwank told Spotlight PA in August. “Who are we designing the system to serve and what will that student body look like?”

100% ESSENTIAL:Spotlight PA relies on funding from foundations and readers like you who are committed to accountability journalism that gets results. If you value this reporting, please give a gift today at spotlightpa.org/donate.