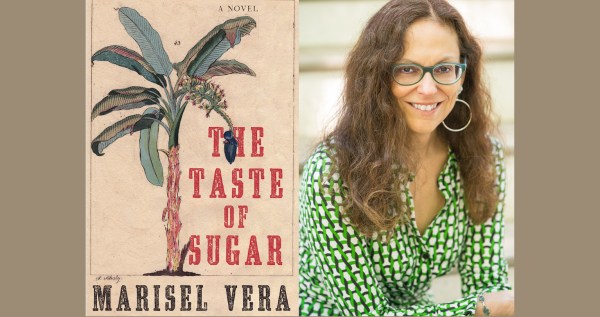 Marisel Vera is a Chicago writer based in Pittsburgh. Through her work, Marisel explores the particular burdens that Puerto Ricans, on the island and in the diaspora, carry as colonial subjects of the United States.

Her latest novel, The Taste of Sugar (Liveright Publishing, June 2020), is a tale of love and endurance on the eve of the Spanish-American War, told through two Puerto Rican families.

Vera’s inspiration for Taste of Sugar came during research work for another novel she was writing. She found out islanders moved to Hawaii to work on sugar cane mills in high numbers at the turn of the 19th century. Moved by this fact, she continued her research with multiple sources including El Centro de Estudios Puertorriqueños in NY. This got her started on the fascinating journey of writing the novel.

A TALE OF LOVE AND ENDURANCE

It is 1898, and groups of starving Puerto Ricans, los hambrientos, roam the parched countryside and dusty towns begging for food. Under the yoke of Spanish oppression, the Caribbean island is forced to prepare to wage war with the United States. Up in the mountainous coffee region of Utuado, Vicente Vega and Valentina Sanchez labor to keep their small farm from the creditors. When the Spanish-American War and the great San Ciriaco Hurricane of 1899 bring devastating upheaval, the young couple is lured, along with thousands of other puertorriqueños, to the sugar plantations of Hawaii—another US territory—where they are confronted by the hollowness of America’s promises of prosperity. Writing in the tradition of great Latin American storytelling, Marisel Vera’s The Taste of Sugar is an unforgettable novel of love and endurance, and a timeless portrait of the reasons we leave home.

PURCHASE YOUR COPY OF
THE TASTE OF SUGAR HERE

Praise for Taste of Sugar has come from numerous editors and personalities at the national level:

Vera is humbled with her work’s positive reception. Praise from Puerto Rican historians and natives has been particularly meaningful. She will be holding a virtual discussion with historians covering historical facts related to The Taste of Sugar in the near future.

Marisel, who grew up in the Windy City, is currently at work on a novel about four Puerto Rican girls growing up in 1970’s Chicago, The Girls from Humboldt Park (working title). She is also the author of If I Bring You Roses (Grand Central), a story about a Puerto Rican couple who move to the United States during 1950s’ Operation Bootstrap to chase the American Dream in Chicago’s factories.

Follow The Taste of Sugar and Marisel Vera at the following links: