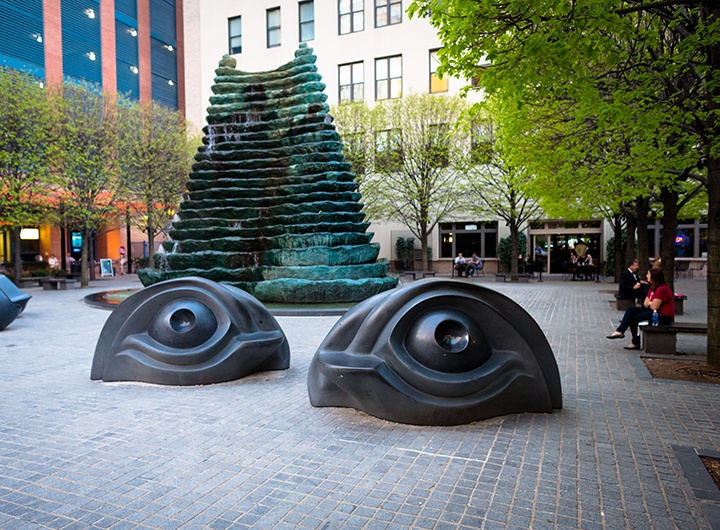 The Three Rivers Arts Festival is back! Put on annually by the Pittsburgh Cultural Trust and Dollar Bank, the Three Rivers Arts Festival will showcase the best of what Pittsburgh has to offer with ten days of free art and music. The festival itself will run from June 3rd to the 12th, and will include a mix of art exhibits, as well as musical and performance acts. All information, including dates, times, and locations, can be found online at https://traf.trustarts.org/events but below are some of the highlights of the festival, including art exhibits, musical performances, and events for families and children.

This year’s featured art exhibit, titled “__alachian [ah-LATCH-en]”, will be showcasing new artwork by regional artists downtown at gallery SPACE on Liberty Avenue. There will also be an exterior art exhibit entitled “Judah” by artist Curtis Reaves at the Granite Building downtown, as well as one at Wood Street Galleries on Liberty Avenue by internationally recognized artist Cinzia Campolese.

820 Gallery on Liberty Avenue, and 707 Gallery on Penn Avenue will also be hosting their own shows during the festival. For more dates and times, information can be found on the Pittsburgh Cultural Trust’s website at https://traf.trustarts.org/events.

Wednesday, June 8th, critically-acclaimed rock and soul singer Bette Smith will be performing as the feature event on Dollar Bank Main Stage at 9th Street from 7:30 to 9pm. Thursday’s performances at Dollar Bank Main Stage will feature The Dirty Dozen Brass band from 6 to 6:20pm, followed by Eric Krasno & The Assembly, a Grammy Award winning guitarist, songwriter, performing from 6:30 to 7:30pm.

Following them, The Devon Allman Project, Nick Lowe’s Quality Rock & Roll Revue, Goodie Mob, Femi Kuti & The Positive Force, and Co. Townes, among others, will also perform at the Main Stage. For specific times and information about the artists, more can be found on the Cultural Trust’s website at https://traf.trustarts.org/events.

For families with young children Anthropology of Motherhood, in collaboration with WHAMglobal, is hosting an interactive event and visual art exhibit entitled “Birthing A Movement”. There will be an art space, interactive amenities, and a place for families with young children to participate in the festival. The event is being hosted at the Encore Building in Downtown Pittsburgh and will be open from 12pm to 8pm every day of the festival.

The Pittsburgh Center for Creative Use will be hosting “Reuse-a-Palooza” Saturday, June 11th and Sunday, June 12th from 12 to 6pm at Trust Oasis on 7th Street. Children and families can come and make art with reclaimed materials. Kidsburgh will also be hosting a “maker event” Saturday, June 11th, from 12 to 6pm in the same location where children can make flowers or a harmonica! More events for families, including a number of StoryCorners will also be held at Trust Oasis. Information on events can be found online.