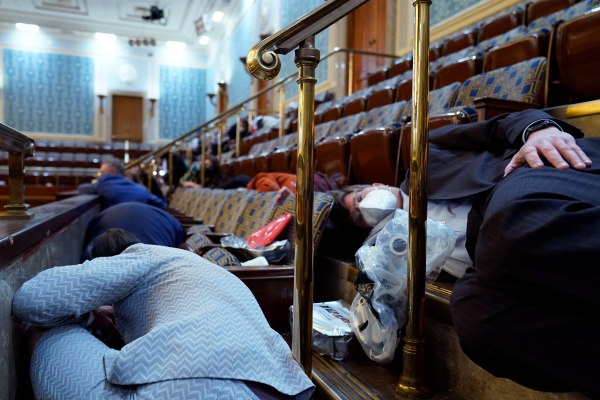 HARRISBURG — State lawmakers in Pennsylvania denounced violence in Washington on Wednesday after a mob of Trump supporters breached the U.S. Capitol to impede the official count of Electoral College votes.

Top Republicans in the state House and Senate said in statements the chaos was not acceptable.

“Sheer size of the crowd in DC is emblematic of how divided we are,” Senate Majority Leader Kim Ward (R., Westmoreland) said in a tweet. “Violence wasn’t ok when groups were destroying property last summer: it’s not ok now. We are a country of laws and without laws, we are doomed.”

In the state House, Republican leadership said in a joint statement, “Any act of violence or destruction is a crime and should be treated as such.”

“An objection to the electoral process is within the rights of members of Congress and has been exercised by members from both sides of the aisle at different times in our nation’s history,” Speaker Bryan Cutler (R., Lancaster) and Majority Leader Kerry Benninghoff (R., Centre) said.

“However, that process leads to debate and dialogue, not violence and mayhem.”

Republican leaders in both the state House and Senate, joined by dozens of members from their caucuses, objected to Wednesday’s Electoral College count and have cast doubt on the integrity of the state’s presidential election.

Their concerns — about guidance from Secretary of the Commonwealth Kathy Boockvar and rulings from the state Supreme Court — have been litigated in court and rejected by judges, many of them Trump appointees.

“When our rules and laws are not followed, chaos takes over,” Senate President Pro Tempore Jake Corman (R., Centre) said in a statement. “What is going on in DC should never happen.”

At least one former state lawmaker and one current member were in Washington on Wednesday as President Donald Trump vowed to “never concede” the election he lost.

Rick Saccone, a former Republican state representative and failed 2018 congressional candidate, traveled to Washington “to save our nation,” he wrote on his Facebook page Wednesday morning.

In the late afternoon, Saccone’s page showed a photo of him with state Sen. Doug Mastriano (R., Franklin), saying he bumped into the “fellow patriot” near the Capitol. Mastriano’s office did not respond to multiple inquiries.

Shortly after that post, a video of Saccone speaking was posted to his account with the description, “We are storming the capitol. Our vanguard has broken thru the barricades. We will save this nation. Are u with me?” All of the photos and videos showed him on a bus or outside the Capitol.

By 5:37 p.m., the video was removed from Saccone’s Facebook page. “Everyone from our group was involved in peaceful, first amendment assembly. It was part of the metaphor to storm the castle so to speak,” he wrote.

In November, Mastriano organized a hearing of the Senate Majority Policy Committee in Gettysburg with Trump lawyer Rudy Giuliani, who pressed his baseless case that the election had been stolen. Ward, the Senate majority leader, attended the event.

State Democrats on Wednesday called on Republican leadership in the Pennsylvania House and Senate “to immediately and unequivocally denounce this violence and support the rule of law and the peaceful transition of power.”

Senate Minority Leader Jay Costa (D., Allegheny) said on Twitter, “What’s happening right now in Washington DC is not a lawful protest. It is a violent takeover attempt of our entire government — urged on by President Donald Trump.”

Gov. Tom Wolf called the events “an attempted coup” and said they were the “direct result of a deliberate disinformation campaign by Republicans from the president down to legislators in Pennsylvania.”

“They lied about the results of the election. They lied about voter fraud. They lied about my administration and other governors,” he said in a statement. “The actions of Republicans in Pennsylvania and across the country have led to violence. It is their fault. There should be no equivocation.”

Outside the Pennsylvania Capitol in Harrisburg just before 4:30 p.m., a handful of people were gathered near the front of the building to protest the results of the presidential election.

“I’m here because our election has been stolen in every possible way,” Ann Van Tassel, 56 of Hanover, said.

100% ESSENTIAL:Spotlight PA relies on funding from foundationsand readers like you who are committed to accountability journalism that gets results. Become a member today at spotlightpa.org/donate.